The Council is proposing to introduce a traffic management scheme in Plough Lane junction with Collyer Avenue and Queenswood Avenue. We are proposing these measures in response to concerns raised by local residents in the area, ward councillors about traffic speed, noise, pollution, cut through traffic and road safety at the above mentioned junctions.

The following measures are proposed:

What is the aim of the measures?

These measures aim to

From the 2023/24 and indicative 2024/25 programmes: (A) / Environment and Sustainable Transport Committee

Perceived safety issues raised that vehicles are not stopping at the

existing zebra because vehicles are rat running to avoid Croydon

Road/A232 (red route). The zebra is located on a link between the two

entrance rather than at the zebra. The proposal is considering measures

to address through traffic issues - initial locations being investigated are

the junctions of Queenswood Avenue/Plough Lane and Collyer

route along Queenswood & Collyers Road as an alternative to the A232

Croydon Road which currently has no cycle facilities along the parallel

stretch. Cyclists using this quiet alternative link will be able to re-join the

A232 Croydon Road via Aldwick Rd which connects to the existing

Croydon Rd cycle facility. This element of the scheme could be moved to 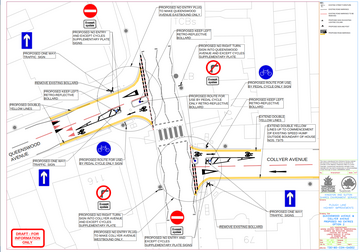