We consulted on our proposals for Cycle Superhighway 9 in autumn 2017. The route is an important part of the Mayor’s Healthy Streets Approach, which aims to make London greener, healthier and more pleasant through encouraging walking, cycling and the use of public transport.

We have published an analysis of the responses and our response to the issues raised here. The feedback we received was valuable in helping us to further improve the scheme.

In response to feedback received through the consultation, we are now carrying out a further consultation on two parts of the route:

We would like to hear your views on these further proposals. A map of the areas where we are carrying out further consultation can be found below.

Other than the two sections identified for further consultation, we will be progressing our plans for the route as outlined in the Response to Issues Raised report. No further consultation is planned on the proposals for the route except for the two parts of the route above. We will carry out local engagement on the rest of our proposals later in the process. We are intending to proceed with our proposals subject to formal approvals.

Following feedback from respondents and the Mayor’s announcement of a new brand for London’s growing network of high-quality cycle routes in the Mayor’s Transport Strategy, this route will no longer be called a Cycle Superhighway. We will work closely with our borough partners on the most appropriate wayfinding for this scheme.

This change provides full segregation for cyclists throughout this section and removes the requirement for two bus stop bypasses we proposed on the north side of Kew Bridge Road. The change also addresses concerns raised about cycle safety at Kew Bridge junction, Green Dragon Lane and Lionel Road South.

We are also proposing a second southbound traffic lane on Kew Bridge to make the junction operate more effectively and to maintain bus journey times in the area.

In summary, our proposals for this section of the route include:

A map of the proposals for Kew Bridge and Kew Bridge Road to Wellesley Road can be found below.

Appendix A - detailed information on these proposals (PDF 237KB)

The original proposals for this section can be found here

We are also proposing to maximise pavement space outside Our Lady of Grace and St Edward Church, in response to local concerns. This will require the reduction of eastbound traffic lanes on Chiswick High Road from two to one.

We proposed four additional pay and display bays on the west side of Duke’s Avenue. Following feedback from the consultation and our discussions with Our Lady of Grace and St Edward Church we are no longer proposing these bays and will instead retain the existing single yellow line as this will provide more opportunity for parking for Church services. Additionally, one proposed space on the eastern side of Duke Road opposite Bourne Place has been removed to ensure vehicles can exit this junction.

In summary, our proposals for this section of the route include:

The segregated two-way cycle track on the southern side of Chiswick High Road has been retained.

A map of the proposals for Duke Road and Duke’s Avenue junction with Chiswick High Road can be found below.

Appendix B - detailed information on these proposals (PDF 241KB)

The original proposals for this section can be found here

How would the proposals affect journey times?

We have carried out detailed traffic modelling on the proposals to understand how our proposals might affect journey times for general traffic, buses, cyclists and pedestrians.

Despite the sophistication of our traffic models, all traffic modelling is only ever indicative; it is intended to give an idea of where the impacts of changes in journeys are most likely to be felt. It assumes that drivers have perfect knowledge of the network and will always choose the quickest route available

We have undertaken traffic modelling on the proposed changes to the scheme, which has indicated the following:

This section has undergone extensive design changes following feedback from the previous consultation, including concerns about the impact on journey times through the junction. The new design changes the ‘with flow’ cycle track into a bi-directional cycle track and provides additional capacity north and southbound on Kew Bridge. As a result, three approaches to the junction will have either an increase in green signal time or an increase in lane capacity, which leads to improved journey times on bus routes 237 and 391 in both directions and bus route 65 east bound compared to the previous designs. One approach to the junction will see a reduction in green signal time which as a consequence, has a minor negative impact on journey times for the 65 westbound bus route.

The design changes at this location have been made to protect trees and retain footway space outside Our Lady of Grace and St Edward Church. There is no longer a right turn lane, but there is space in front of the stop line for up to two right turning vehicles without blocking vehicles travelling east, including buses. As the predicted traffic volumes are low, this junction is expected to operate effectively and the design change is predicted to have minimal impact on overall bus and traffic journey times.

Detailed results of our traffic modelling can be found below.

We are subject to the general public sector equality duty set out in section 149 of the Equality Act 2010, which requires us to have due regard to the need to eliminate discrimination, advance equality of opportunity and foster good relations by reference to people with protected characteristics.

Our autumn 2017 consultation set out how we had due regard to the duty and can be found here.

We have updated our Equality Impact Assessment (EqIA) for the proposed changes. The EQIA completed for this scheme shows positive impacts for black and ethnic minority groups, females, disabled cyclists, and cyclists under 25 and over 65 years of age. Positive impacts have also been identified for disabled pedestrians, as the scheme proposes a number of improvements to pedestrian facilities including enhanced crossing facilities, increased pavement widths and new pedestrian crossings.

Some negative impacts have been identified where pavements are proposed to be cut back or shared use is proposed, however we have ensured that they are appropriate for number of pedestrians in the area and that they allow two wheelchair users to pass safely. Shared use areas would be provided only where there is sufficient space for pedestrian and cyclists. Some negative impacts have also been identified where we are proposing to install bus stop bypasses. We recently agreed therefore to include zebra crossings at all bus stop bypasses. The crossings would have tactile paving and would be raised to footway level to create a flush surface.

Public drop-in events and have your say

We will be holding public drop-in events at which staff involved in the project will be available to answer your questions:

You can let us know your views on these proposals by taking part in our online survey below.

We would like to know what you think about our proposals.

Please give us your views by completing the online survey below by Tuesday 26 February 2019.

You can also request paper copies of all the consultation materials and a response form by emailing consultations@tfl.gov.uk, or writing to FREEPOST TFL CONSULTATIONS. 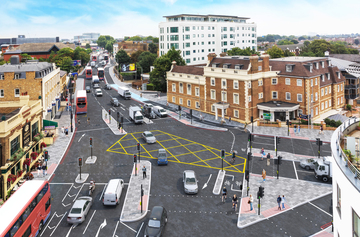