All of the Consultations that we respond to are first posted on Cyclescape (for info on how to post a new consultation, see https://camdencyclists.cyclescape.org/threads/4723). We encourage members and others to offer comments and suggestions for inclusion in our response.

After registering on Cyclescape you can post messages on all our public discussions and you can initiate discussions yourself (New Issues or Threads on existing Issues). We strongly deprecate the use of pseudonyms unless they are backed up by a full name shown in your Cyclescape personal profile.

We campaign for much better Space for Cycling in London.

Monthly meetings, workshops and training
We meet on the third Monday of each month at 7.30 pm either at Primrose Hill Community Centre (usually) or at Sidings Community Centre , West Hampstead (occasionally). Our AGM is in May and annual party in December.

Interaction with LB Camden, TfL and Royal Parks
We have four meetings a year with a group of Camden Officers to discuss how cycling issues can be incorporated into local area schemes currently being planned and how well they are addressed in built schemes. Paul Braithwaite (Councillor 2006-10 and 10-14, Camden’s Cycling Champion) was a useful participant in these meetings. His role has now been taken up by our new Cycling Champion Councillor Julian Fullbrook. Many ad-hoc meetings are arranged to discuss projects in detail (e.g. West End Project, Royal College Street extensions, St Marks Square). We also have occasional meetings with TfL officers (e.g. on Swiss Cottage gyratory and Camden Road). We participate in the Royal Parks Cycling Development Group.

Bike Week
We hold two regular events in Bike Week, a national event which usually takes place in June. On the Wednesday morning from 8-10 a.m. we provide a Free Cyclists’ Breakfast in Ossulston Street, run jointly with Camden Council (the 2017 event was the 20th in succession). The Ride all Round Camden is enjoyed by people of all cycling abilities. It is led and marshalled by Camden Cyclists and Camden Cycle Trainers and accompanied by police officers. The route starts from the Town Hall, follows the border of the borough clockwise with a picnic in Golders Hill Park.

Social Rides
During the spring and summer we organise a ride at least once each month. These usually include the popular Lee Valley Ride and a train-assisted ride in Herts, Kent or Essex as well as the newer Brent Parks Ride and the Ice Cream Potter. We also lead feeder rides from Swiss Cottage and West Hampstead to the summer Ride London Circuit.

Campaigning Rides
We have led feeder rides to campaigning rides organised by LCC such as the Space for Cycling rides in 2013 and 2014. 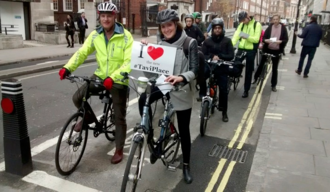